Meet the rest of the team → 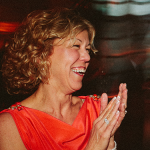 Take a walk in Patty’s shoes (which are always quite fashionable) and learn about how she ended up here, helping launch BreakOut!

After a few years, Patty traded her PT career for full time motherhood.  During that time, she supported Jay as he started his first physical therapy practice in Zelienople, PA.  As the practice grew, Patty was called in to head up a program to create and maintain outcomes data on the practice.

In 2003, when Jay started his second practice, Panther Physical Therapy, Patty supported him by sewing treatment gowns, manning the front desk, figuring out how to bill electronically, and essentially completing any other task except patient treatment.

After a brief retirement, Patty has been called into action once again supporting Jay as he opens his final practice. Does there appear to be a theme present here?  Patty supports Jay and his many endeavors.  He has promised that Breakout Advisors & Rehabilitation is his final hurrah!  So once again she will lend her support although this time there was a fair amount of kicking and screaming involved!

An important point to note is that Patty loves Jay and that has been the basis for her support, but even more than that, she has seen his impact on those he treats and works with and she feels compelled to support that.

She’s looking forward to seeing that positive impact continue on with the opening of Breakout, their newest endeavor together.